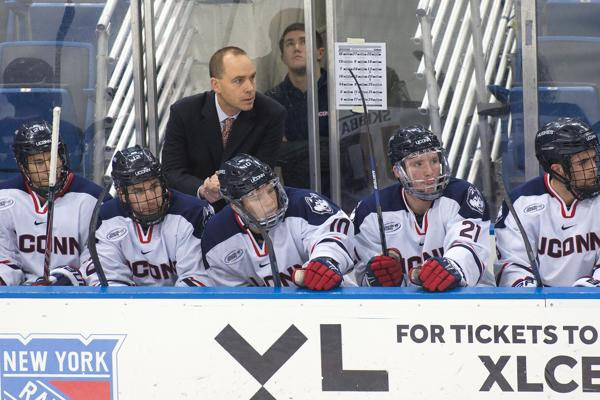 Michael Cavanaugh, the University of Connecticut men’s hockey head coach and one of the game’s top recruiters, believes that all college hockey coaches initially look for the same things in a recruit: “Skating ability, the ability to make plays and a high-grade hockey IQ.”

Cavanaugh knows firsthand how to evaluate a college hockey prospect. Prior to taking the reins at Connecticut, Cavanaugh spent 18 years as an assistant coach and associate head coach at Boston College, during which time the Eagles won four national titles. In all, Cavanaugh helped groom 22 All-America selections and more than 30 NHL players. A large part of Boston College’s winning foundation was built on Cavanaugh’s ability to not only recruit premiere talent but also find premiere talent that fit his program’s culture both on and off the ice.

Cavanaugh will be the first one to tell you that college hockey recruiters don’t merely evaluate players’ on-ice skill set. To get a full evaluation of their true ability, potential and character, Cavanaugh considers a host of other factors, too.

“We also look at little things like how good of a teammate the player is,” said Cavanaugh. “How well a player handles adversary and criticism and coaching is also very important.”

Cavanaugh offers the following advice on what college coaches seek in prospective recruits:

“I think it’s important that coaches recruit to the style of hockey that they want to play,” said Cavanaugh.

There are 59 Division I hockey teams and all of them have varying degrees of team identity and playing style.

“Union won the NCAA championship with fast and mobile defensemen like Mat Bodie and Shayne Gostisbehere,” said Cavanaugh. “The coach decides what style he wants to play and then recruits according to that model.”

When Cavanaugh watches a prospect, he judges the player’s entire game, not just the highlights. The player’s actions and reactions to negative and positive situations between whistles and on the bench are included in his evaluation, too. This is important for 14U/16U players to remember, because emotions can often run high and then swing low if they’re not in control.

“I watch the player throughout the whole game,” said Cavanaugh. “We watch his body language on the bench. Does he try to lift up his teammates? How does he handle the coach’s criticism during the game? These are the things you can’t see on video.”

Work Hard on the Ice and in the Classroom

At Boston College, renowned Eagles head hockey coach Jerry York has two basic principles for the foundation of the hockey program: Compete for championships and graduate players. Cavanaugh has carried this tradition with him to UConn.

“When I recruit a player, I tell him that if they don’t want to go to class, they should go play major junior hockey,” said Cavanaugh. “If you’re going to come to UConn, I’m going to push you as hard in school as I do on the ice.”

Cavanaugh truly believes that there’s a direct correlation between kids that do well in school and kids that succeed on the ice.

“I know that the teams I coached at B.C. that won championships were always led by a senior class that had guys flirting with 3.0 GPAs or better,” he added. “I think as a hockey player, if you’re going to put the time and effort into school, hockey will be the fun part.”

The Importance (and Unimportance) of Size

Cavanaugh also wants 14U/16U players to know that they shouldn’t be discouraged if they are smaller in stature.

He points to outstanding Boston College alums and current NHL players Nathan Gerbe (5-foot-5), Johnny Gaudreau (5-foot-9), and Brian Gionta (5-foot-7) as examples of players who were often overlooked because of their size but achieved great things through hard work and heart.

“The college decision is four years that will shape the next 40,” said Cavanaugh. “That should be the student-athlete’s decision. That being said, it’s important that the parents provide their child with a strong sounding board and guidance. They can express their opinion and present the facts. At some point in their life though, the child has to make decisions on their own.”

Cavanaugh illustrates this point by telling a story about the time he recruited a player for Boston College.

“The player’s dad went to a rival alma mater and I assumed the dad would guide the kid to that school,” said Cavanaugh. “I was pleasantly surprised when the kid committed to B.C. Later on, the dad told me that the one phone call he never wanted to get was from his son asking him why he sent him to that school and not the one he really wanted to go to. That really shaped my views.”

A true college hockey prospect is comprised of many desirable traits, but there is always one constant.

“Work ethic is a given,” said Cavanaugh. “Everybody that plays for me works hard. I would think all 59 Division I coaches would say the same thing.”

Cavanaugh believes that there are many different paths that can lead to Division I opportunities for a 14U/16U player.

As long as players are dedicated and routinely practice their basic skills, play hard and act as good teammates, good things can happen for any player in any city. After all, college coaches have huge radars and they’re always looking for talented players.

“I flew to Minnesota to watch a certain player,” said Cavanaugh. “But during the game, I noticed two outstanding players on the opposite team. I inquired with the coach of the two opposing players. We took another look at these two kids and really liked them. We recruited them and brought them out for a visit. We couldn’t figure out why these two kids weren’t being heavily recruited. Now, both Johnny Austin and Spencer Naas are on our UConn roster. It all worked out.”

“Our responsibility is to develop athletes thoroughly. Not just athletically but spiritually, academically and attitudinally.” Legendary Coach John Wooden