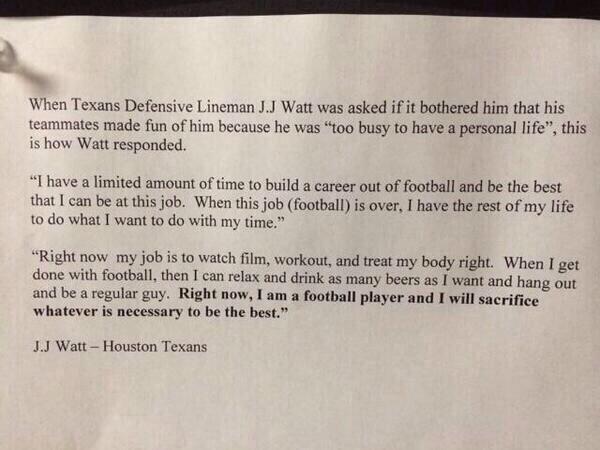 For those of you who don’t know, J.J. Watt is an all-pro defensive lineman for the Houston Texans in the NFL.
Watt’s sophomore season in the NFL turned out to be one of the greatest seasons by a defensive player in NFL history. During the week 12 Thanksgiving game against the Detroit Lions, Watt broke the Texans franchise record set by former teammate Mario Williams for most sacks in a single season. Watt finished the regular season with 81 tackles (69 solo), 20.5 sacks, 39 tackles for loss, 4 forced fumbles, 2 fumble recoveries, and an astonishing 16 passes defended – a statistic usually reserved for defensive backs.[13] Making his All-Pro debut, he was a unanimous choice for The Associated Press All-Pro team.[14] Because of his knack for batting balls down at the line of scrimmage, he was nicknamed “J.J. Swatt” by Monday Night Football commentator and former NFL head coach Jon Gruden.[15]

Watt became the first player in NFL history to record 16.5 sacks and tip 15 passes in a single season after a Week 13 victory against the Tennessee Titans. He was a starting defensive end for the AFC Division in the 2013 Pro Bowl. J.J. Watt and the Texans were in the top of the AFC for the first sixteen weeks, but with a loss to the Colts in week 17, with Broncos and Patriots wins, they slid down to the third seed and faced the Cincinnati Bengals in the wildcard round for the second consecutive postseason. In the game, J.J Watt had 5 tackles and a sack. He helped the Houston defense hold Bengals to 6 (offensive) points to give Texans a 19-13 victory. The Texans played at the Patriots (#2 seed) in the divisional round. J.J. Watt and the defense were not as dominant in this match and allowed 41 points. Watt only had 4 tackles and a half sack in the game, and the Texans were eliminated with a final score of 41-28. On January 15, 2013, Watt was selected as the AFC Defensive Player of the Year.[16] On February 3, 2013, Watt was awarded the AP NFL Defensive Player of the Year, receiving 49 of the 50 total votes.[17] He also made his debut on NFL’s Top 100 list at No. 5, the highest ever debutant, and the highest-ranked defensive player.[18] 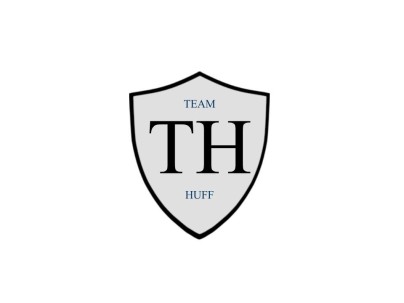 “Our responsibility is to develop athletes thoroughly. Not just athletically but spiritually, academically and attitudinally.” Legendary Coach John Wooden